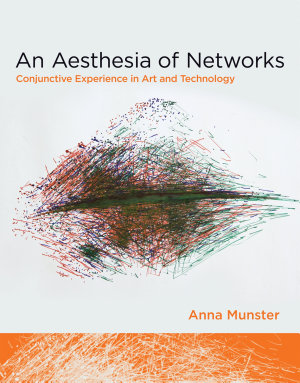 The experience of networks as the immediate sensing of relations between humans and nonhuman technical elements in assemblages such as viral media and databases. Today almost every aspect of life for which data exists can be rendered as a network. Financial data, social networks, biological ecologies: all are visualized in links and nodes, lines connecting dots. A network visualization of a corporate infrastructure could look remarkably similar to that of a terrorist organization. In An Aesthesia of Networks, Anna Munster argues that this uniformity has flattened our experience of networks as active and relational processes and assemblages. She counters the “network anaesthesia” that results from this pervasive mimesis by reinserting the question of experience, or aesthesia, into networked culture and aesthetics. Rather than asking how humans experience computers and networks, Munster asks how networks experience—what operations they perform and undergo to change and produce new forms of experience. Drawing on William James's radical empiricism, she asserts that networked experience is assembled first and foremost through relations, which make up its most immediately sensed and perceived aspect. Munster critically considers a range of contemporary artistic and cultural practices that engage with network technologies and techniques, including databases and data mining, the domination of search in online activity, and the proliferation of viral media through YouTube. These practices—from artists who “undermine” data to musicians and VJs who use intranetworked audio and video software environments—are concerned with the relationality at the core of today's network experience.

An Aesthesia of Networks

Authors: Anna Munster
Categories: Social Science
The experience of networks as the immediate sensing of relations between humans and nonhuman technical elements in assemblages such as viral media and databases

Listening in the Afterlife of Data

Authors: David Cecchetto
Categories: Social Science
In Listening in the Afterlife of Data, David Cecchetto theorizes sound, communication, and data by analyzing them in the contexts of the practical workings of s

Authors: Catherine Summerhayes
Categories: Social Science
In order to be able to communicate and engage with each other via new communicative spaces such as Google Earth, we need to understand as much as possible about

The Routledge Companion to Media Studies and Digital Humanities

Authors: Jentery Sayers
Categories: Social Science
Although media studies and digital humanities are established fields, their overlaps have not been examined in depth. This comprehensive collection fills that g

Authors: Nicole Starosielski
Categories: Social Science
In our "wireless" world it is easy to take the importance of the undersea cable systems for granted, but the stakes of their successful operation are huge, as t

Sociology, Science, and the End of Philosophy

Authors: Sal Restivo
Categories: Social Science
This book offers a unique analysis of how ideas about science and technology in the public and scientific imaginations (in particular about maths, logic, the ge

Updating to Remain the Same

Authors: Tommaso Venturini
Categories: Social Science
As disputes concerning the environment, the economy, and pandemics occupy public debate, we need to learn to navigate matters of public concern when facts are i