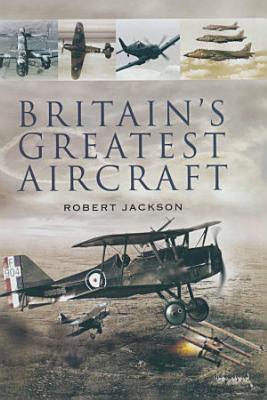 During the last century the British aircraft industry created and produced many outstanding aeroplanes. These aircraft were world leaders in advanced technology, utilizing inventions by British engineers and scientists such as radar, the jet engine, the ejector seat and vertical take-off and landing. This book describes the design-history, development and operational careers of twenty-two legendary military and civil aeroplanes. Each one has played a significant part in aviation history. Sopwith Camel, SE.5, Bristol F2B Fighter and the Airco DH4 were all great successes in the relatively early days of flight. In the thirties the Bristol Bulldog fighter was an outstanding export success and the Short 'C' Class flying boat, later to become the Sunderland of World War II fame, pioneered the long-distance routes to the Empire. The pugnacious foreign policy of Hitler's Reich rung sudden alarm bells, rapid advances in fighting aircraft for the RAF became a premium objective. The brilliant Geodic construction of the Vickers Wellington bomber helped it survive terrible punishment throughout World War II, both the Hawker Hurricane and the Supermarine Spitfire saved England from invasion and the Bristol Beaufighter, de Havilland Mosquito and Avro Lancaster took the war to enemy soil. The Gloster Meteor became the word's first operational jet fighter and the English Electric Canberra became the RAF's first jet bomber and was manufactured under licence in the USA as the Martin B-57. In post-war years the Vickers Viscount became the world's first turboprop airliner and eventually became Britain's best selling commercial aircraft, whilst the de Havilland Comet became the world's first jet airliner. Despite Britain's recessionary years in the 50s and early 60s, military success came with the beautiful Hawker Hunter, the super-sonic Fairey Delta experimental aircraft that broke the World Air Speed Record and the Vickers Valiant that pioneered the operational techniques to deliver Britain's nuclear deterrent. Later, there followed the Mach 2 English Electric Lightning and the ill-fated TSR-2, the cancellation of which is still regarded as one of the greatest mistakes ever made in British aviation history. Finally, the Harrier, the world's first vertical take-off and landing jet fighter that is still in service and now only being built in the USA. Finally the Harrier, the world's first vertical take-off and landing jet fighter, still in service and now being further developed in the USA.

Authors: John Nichol
Categories: History
THE SUNDAY TIMES NON FICTION BESTSELLER WHSmith NON-FICTION BOOK OF THE YEAR 2018 'The best book you will ever read about Britain's greatest warplane' Patrick B

Authors: Bruce Hales-Dutton
Categories: Transportation
From as early as the beginning of the nineteenth century, Britain was at the forefront of powered flight. Across the country many places became centres of innov

The Birth of the Royal Air Force in World War I

Authors: Charles River Editors
Categories:
*Includes pictures *Includes contemporary accounts *Includes online resources and a bibliography for further reading One of the most important breakthroughs in

Authors: Len Cacutt
Categories: Science
Covers all the famous aircraft from the Red Baron's World War I Fokker triplane to the European Airbus and Tornado projects of the 1980s

Authors: J Paul Hodgson
Categories: History
Great Britain’s aircraft industry started in 1908, with the first formally registered organization in the world to offer to design and build an aeroplane ‘f

From the Wright Brothers to Top Gun

Authors: Michael Paris
Categories: Flight in motion pictures.
The cinema and aviation developed alongside each other, and were both products of the technology and imagination of the early 20th century. This book examines t