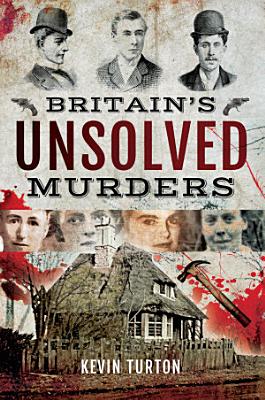 Britain has its fair share of unsolved murders. Crimes that have both fascinated and horrified in equal measure, with many as baffling today as they were when the stories first hit the headlines in the national press. Spanning 100 years between 1857-1957, this book re-examines thirteen of these murder cases and retells the stories that have endured and confounded both police and law courts alike. Each chapter provides an account of the circumstances surrounding the killing, of the people caught up in the subsequent investigation and the impact it had on some of their lives. It also explores the question of guilt and to whom it should, or should not, be attached. Each of these murders poses an undeniable truth; no-one was ever proven to have committed the killing despite, in some cases, accusing fingers being pointed, arrests being made and show trials taking place. Consequently, notoriety, deserved or otherwise, was often attached to both victim and accused. But was it ever merited? From the questionable court case surrounding Scotland’s now famous Madeleine Smith, and the failed police investigation into Bradford’s Jack the Ripper case of 1888, to the mysterious deaths of Caroline Luard and Florence Nightingale Shore at the start of the twentieth century, this book disturbs the dust, sifts the facts and poses the questions that mattered at the time of each murder. Did Harold Greenwood poison his wife in Kidwelly? Who was responsible for the Ripper-like killing of Emily Dimmock and Rose Harsent? Why did Evelyn Foster die on the moor near Otterburn in what became known as the Blazing car murder and who strangled Ann Noblett to death in 1957? These are just some of the cases examined and the stories behind them. Each and every one, no matter how appalling the crime, still deserving of justice.

Authors: John Lucas
Categories: True Crime
Serial killer Patrick Mackay was dubbed the most dangerous man in Britain when he appeared in court in 1975 charged with three killings, including the axe murde

Authors: Judith Rowbotham
Categories: History
Drawing together examples from broadsheet and tabloid newspapers this account of English crime reportage takes readers from the late eighteenth century to the p

Authors: Russell Ash
Categories: Reference
From the bestselling author of "Hamlyn's Top 10 of Everything" series comes a special collection of 250 unique lists that observe of the idiosyncrasies of our I

Authors: Dylan Frost
Categories: True Crime
The history of true crime in Britain is a long and, as we shall see, often stranger than fiction tale. The book that follows offers an eclectic stew of strange

Violence and Sex Work in Britain

Authors: Vanessa Howard
Categories: History
Murder is rare. Rarer still are those killers who get away with it - but they are out there, walking our streets. Included in this in-depth book are some famous