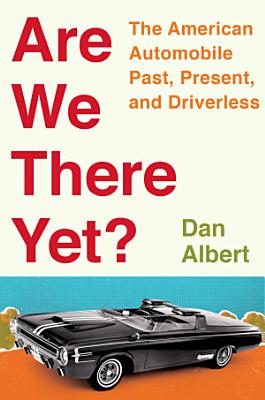 Tech giants and automakers have been teaching robots to drive. Robot-controlled cars have already logged millions of miles. These technological marvels promise cleaner air, smoother traffic, and tens of thousands of lives saved. But even if robots turn into responsible drivers, are we ready to be a nation of passengers? In Are We There Yet?, Dan Albert combines historical scholarship with personal narrative to explore how car culture has suffused America’s DNA. The plain, old-fashioned, human-driven car built our economy, won our wars, and shaped our democratic creed as it moved us about. Driver’s ed made teenagers into citizens; auto repair made boys into men. Crusades against the automobile are nothing new. Its arrival sparked battles over street space, pitting the masses against the millionaires who terrorized pedestrians. When the masses got cars of their own, they learned to love driving too. During World War II, Washington nationalized Detroit and postwar Americans embraced car and country as if they were one. Then came 1960s environmentalism and the energy crises of the 1970s. Many predicted, even welcomed, the death of the automobile. But many more rose to its defense. They embraced trucker culture and took to Citizen Band radios, demanding enough gas to keep their big boats afloat. Since the 1980s, the car culture has triumphed and we now drive more miles than ever before. Have we reached the end of the road this time? Fewer young people are learning to drive. Ride hailing is replacing car buying, and with electrification a long and noble tradition of amateur car repair—to say nothing of the visceral sound of gasoline exploding inside a big V8—will come to an end. When a robot takes over the driver’s seat, what’s to become of us? Are We There Yet? carries us from muddy tracks to superhighways, from horseless buggies to driverless electric vehicles. Like any good road trip, it’s an adventure so fun you don’t even notice how much you’ve learned along the way.

Are We There Yet?: The American Automobile Past, Present, and Driverless

Ghost Road: Beyond the Driverless Car

Authors: Anthony M. Townsend
Categories: Social Science
A penetrating look at near-future disruption as truly autonomous vehicles arrive. For decades we have dreamed of building an automobile that can drive itself. B

Authors: Robert W. Poole
Categories: Business & Economics
Americans spend hours every day sitting in traffic. And the roads they idle on are often rough and potholed, their exits, tunnels, guardrails, and bridges in te

Authors: Robert A. Simons
Categories: Architecture
The subject of driverless and even ownerless cars has the potential to be the most disruptive technology for real estate, land use, and parking since the invent

Move: How to Rebuild and Reinvent America's Infrastructure

Authors: Hussein T. Mouftah
Categories: Technology & Engineering
This book presents a comprehensive coverage of the five fundamental yet intertwined pillars paving the road towards the future of connected autonomous electric

No One at the Wheel

Authors: Samuel I Schwartz
Categories: Transportation
The country's leading transport expert describes how the driverless vehicle revolution will transform highways, cities, workplaces and laws not just here, but a

The State of American Hot Rodding

Authors: David Lawrence Miller
Categories: Transportation
As the automotive world looks towards a future of electric vehicles, driverless technology and anonymous styling, what can be learned from the individuals who r