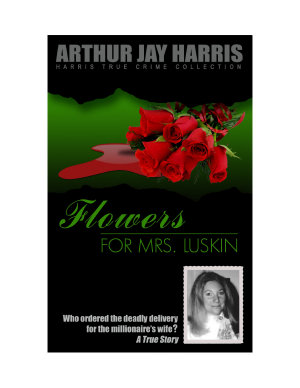 Deep into the then biggest-dollar divorce in the history of Broward County, Florida, in which she’s winning everything so far, Mrs. Luskin gets an unexpected flower delivery of cheap azaleas at the mansion she’d kicked her husband out of after he’d had an affair with his high-school girlfriend. Behind the pastel pistils comes a gleaming silver pistol. The man screams it’s a robbery, he just wants her money. She tells police that he hit her in the head with the gun, but federal prosecutors later insist she was shot and grazed by a bullet, although no bullet was ever found and the room was mirrored on four sides. On that hinges the husband’s conviction for attempted murder-for-hire conspiracy. He goes to prison for 15 years and marries his high-school girlfriend, but was he guilty? It turns out that the prosecutors at trial had held back evidence proving their star witness had crucially lied. But were prosecutors otherwise basically right, only that someone else who they hadn’t charged -- not the husband -- was behind it all? Flowers for Mrs. Luskin was originally published by Avon Books. Story appeared as the cover story of newspaper magazines in The Miami Herald, Baltimore Sun, and Orlando Sentinel. A Millionaire Has An Affair. His Wife Throws Him Out. She Gets The Mansion, The Business, The Cash. His Parents' Business. His Parents' Cash. She Gets Shot And Doesn't Know It. The Bullet Disappears. He Goes To Prison. His Parents Flee The Country. He Weds The Other Woman Behind Bars. Has There Ever Been A Case Like This? --The Miami Herald "Flower delivery for Marie Luskin!" That was a curious surprise. Her husband Paul used to send her flowers all the time, but those days had passed forever. A year and a half before, following Paul's affair with another woman, Marie kicked him out of the house his parents had helped them buy--the biggest house in Emerald Hills, which was the best section of Hollywood, Florida--then filed for divorce. And what a spectacular divorce. If nastiness could be judged quantitatively, the civil war of the Luskins was the meanest divorce Broward County had ever seen. "Who is it from?" "There's no name on the card." "What florist are you from?" "Emerald Hills Florist." Still apprehensive, she cracked open the wooden door just enough to see him. With a sudden incongruous movement, the man stuck his foot in the doorway and thrust the flowers at her with his left hand. As she reached to take them, he stuck a silver pistol in her face. Marie started shrieking uncontrollably. She tried to run inside, but the man grabbed her, one arm around her neck, grasping for her mouth with his hand. The flower pot fell to the black-and-white marble parquet floor and shattered, pink petals scattering. "Shut up! Shut up!" he yelled, closing the door behind him. "I'm not going to hurt you. Shut the hell up, stop screaming!" She finally stopped when his hand formed a gag hard around her mouth, and she realized the gun was at her temple. She couldn't stop looking at the gun, which framed his cruel eyes. Then the man made an odd demand: "Give me all your cash! Give me all your cash! Show me where you keep your cash! I'm not going to hurt you, but if you don't cooperate, I'm gonna blow your brains out!" With the man clenching her long blond hair, the gun to the side of her head, she led him upstairs to a small room where she showed him a hundred-dollar bill. "Where's all your cash! Give me all your cash!" "It's in the bank!" she whined. "It's in the bank! This is it. This is all I have at home, I keep all my money in the bank!" As the crescendo of voices in the Luskin house rose to a climax, exactly what happened next remains in dispute. Marie fell to the floor, a terrible pain in the back of her head. She didn't lose consciousness, but pretended to. Meekly, she opened her eyes and noticed there was blood all over her. She thought she was going to die... The man had left without taking anything. The issue would become, had she been hit like she thought, or shot? That would seem to be the difference between a robbery and an attempt to kill her that might have descended from her husband. Doctors found three minuscule pieces of lead in her bloody scalp. If they were fragments from a bullet, could she have been shot without realizing it? Or were they from the gun or whatever it was that hit her, or the decorative metal hair barrette she was wearing that had broken, separating its clip that had been held together by lead-based solder? Also, if a gun was fired in that small room, where was the rest of the bullet? The police didn't find it. And why hadn't it shattered one of the room's three full-length mirrors? That would become the story's essential mystery, and the answer would determine whether Paul and his alleged accomplices would go to prison. It must have been a shot, a federal court jury determined, because they convicted all four of attempted murder-for-hire. Doubting it, true crime author Arthur Jay Harris went on an Odyssey through the heights and depths of Miami and Baltimore. To the very last page, what he found kept surprising him.

Authors: Arthur Jay Harris
Categories: True Crime
Deep into the then biggest-dollar divorce in the history of Broward County, Florida, in which she’s winning everything so far, Mrs. Luskin gets an unexpected

Box Set: Flowers for Mrs. Luskin and The Unsolved Murder of Adam Walsh Books One and Two

The Unsolved "Murder" of Adam Walsh

Authors: Arthur Jay Harris
Categories: True Crime
Three years into the investigation of a horrific homicide case, a suburban home invasion murder of a wife and mother and point-blank shootings of her infant, hu

Authors:
Categories: American literature
A world list of books in the English language.

The Unsolved Murder of Adam Walsh

Authors: Arthur Jay Harris
Categories:
THIS BOX SET INCLUDES BOOKS ONE AND TWOSix-year-old Adam Walsh disappeared from the toy department of a Sears in Hollywood, Florida, in 1981. Two weeks later an