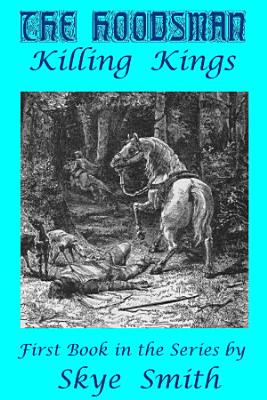 Cover Flap An English arrow ended the Viking Era when it killed King Harald of Norway at Stamford in 1066. That one arrow changed the history of all of the North Sea kingdoms, and a month later William the Conqueror began his twenty-year reign of terror over England. Thirty-four years after the death of Harald, when the Conqueror's son, King William II, had turned into a worse king than even his father, the same man who loosed the arrow in Stamford decided that it was past time to loose another arrow and kill another king. This is the first in a series of historical novels about that English bowman, and about the brotherhood of English archers that became the core of the resistance movement against the enslavement of the English by the psycho ruling class of Normandy. The Brotherhood, the Hood, the Hoodsmen. About the Author Skye Smith is my pen name. My ancestors were miners and shepherds near Castleton in the Peaks District of Derbyshire. I have been told by some readers that this series reminds them of Bernard Cornwell’s historical novels, and have always been delighted by the comparison. This is the first of my Hoodsman series of books, and you should read it before reading any of the other books. All of the books contain two timelines linked by characters and places. The “current” story is set in the era of King Henry I in the 1100’s, while the longer “flashback” story is set in the era of King William I after 1066. I have self-published twelve “The Hoodsman” historical-adventure novels and one Companion reference book for the series: # - SubTitle William I Timeline Henry I Timeline 1. Killing Kings 1066 killing King Harald of Norway (Battle of Stamford Bridge) 1100 killing King William II of England. Henry claims the throne. 2. Hunting Kings 1066 hunting the Conqueror (Battle of Hastings Road) 1100 hunting Henry I (Coronation Charter) 3. Frisians of the Fens 1067/68 rebellions. Edgar Aetheling flees north with Margaret. 1100 amnesty and peace. Henry recruits English bowmen. 4. Saving Princesses 1068/69 rebellions. Margaret weds Scotland (Battle of Durham) 1100/01 Edith of Scotland weds Henry (Battle of Alton) 5. Blackstone Edge 1069/70 rebellions (The Harrowing of the North) 1101 peace while the economy is saved from the bankers 6. Ely Wakes 1070/71 Frisian rebellion (Battles of Ely and Cassel) 1101 Henry collects allies. Mary of Scotland weds Boulogne. 7. Courtesans and Exiles 1072/74 English lords flee abroad (Battle of Montreuil, Edgar surrenders) 1102 Henry collects allies (the honour of Boulogne) 8. The Revolt of the Earls 1075/76 Earls revolt (Battles of Worchester and Fagaduna) 1102 Earls revolt (Battles of Arundel, Bridgnorth, Shropshire) 9. Forest Law 1076/79 fighting Normans in France (London Burned, Battle of Gerberoi) 1103 fighting Normans in Cornwall (Battle of Tamara Sound) 10. Queens and Widows 1079/81 rebellions (Gateshead, Judith of Lens) 1103 Edith made Regent (Force 5 Hurricane) 11. Popes and Emperors 1081 Normans slaughter English exiles (Battle of Dyrrhachium) 1104 Henry visits Normandy (Duchy run by warlords) 12. The Second Invasion 1082/85 power vacuum, peaceful anarchy (Regent Odo arrested enroute to Rome) 1085/87 Re-invasion and Harrowing of all England (Battle of Mantes, Conqueror dies) 1104/05 Henry invades Normandy twice (Battle of Tinchebray) Other Novels By The Same Author: The Pistoleer – 9 historical adventures set in the English Civil War. Maya’s Aura – 8 new age adventures while tripping around the world. Knut – many historical adventures set in the Viking Era.

Authors: Skye Smith
Categories: Fiction
Cover Flap An English arrow ended the Viking Era when it killed King Harald of Norway at Stamford in 1066. That one arrow changed the history of all of the Nort

Authors: Don Pendleton
Categories: Fiction
KILLER TAKEDOWN The Executioner believes in final justice—so when rumors swirl that someone is trying to revive the empire of Pablo Escobar, the King of Cocai

Authors: Matthew Harffy
Categories: Fiction
AD 636. Anglo-Saxon Britain. Beobrand has land, men and riches. He should be content. And yet he cannot find peace until his enemies are food for the ravens. Bu

Authors: Skye Smith
Categories: Fiction
Cover Flap This is the second in a series of historical novels about an English bowman, and the brotherhood of English archers that became the core of the resis

A Killer in King's Cove

Authors: Iona Whishaw
Categories: FICTION
Includes a 13-page preview of the next novel in the series: Death in a darkening mist.

A Dictionary of Christian Biography, Literature, Sects and Doctrines

Authors: Simon Simonse
Categories: Social Science
This is the long awaited, revised and illustrated edition of Kings of Disaster, the study of the Rainmakers of the Nilotic Sudan that is in many ways a breakthr