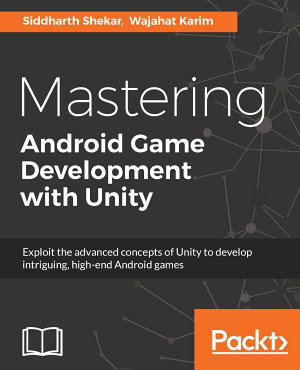 Create enthralling Android games with Unity Faster Than Ever Before About This Book Develop complex Android games with the help of Unity's advanced features such as artificial intelligence, high-end physics, and GUI transformations. Create amazing Graphical User Interfaces (GUIs) with Unity's new uGUI system Unravel and deploy exciting games across Android devices Who This Book Is For If you are a Unity 5 developer and want to expand your knowledge of Unity 5 to create high-end complex Android games, then this book is for you. Readers are expected to have a basic understanding of Unity 5, working with its environment, and its basic concepts. What You Will Learn Develop your own Jetpack Joyride clone game Explore the advanced features of Unity 5 by building your own Action Fighting game Develop remarkable Graphical User Interfaces (GUIs) with Unity's new uGUI system Enhance your game by adding stunning particle systems and complex animations Build pleasing virtual worlds with special effects, lights, sky cube maps, and cameras Make your game more realistic by providing music and sound effects Debug and deploy your games on different Android devices In Detail Game engines such as Unity are the power-tools behind the games we know and love. Unity is one of the most widely-used and best loved packages for game development and is used by everyone, from hobbyists to large studios, to create games and interactive experiences for the Web, desktop, mobile, and console. With Unity's intuitive, easy-to-learn toolset and this book, it's never been easier to become a game developer. You will begin with the basic concepts of Android game development, a brief history of Android games, the building blocks of Android games in Unity 5, and the basic flow of games. You will configure an empty project for the Jetpack Joyride Clone Game, add an environment and characters, and control them. Next you will walk through topics such as particle systems, camera management, prefabs, animations, triggers, colliders, and basic GUI systems. You will then cover the basic setup for 3D action fighting games, importing models, textures and controlling them with a virtual on-screen joystick. Later you will set up Scene for 3D Configuration, create basic gameplays, and manage input controls. Next you will learn to create the interface for the main menu, gameplay, game over, achievements, and high score screens. Finally you will polish your game with stats, sounds, and Social Networking, followed by testing the game on Android devices and then publishing it on Google Play, Amazon, and OUYA Stores. Style and approach A step-by-step and detailed guide to developing high-end complex Android games utilizing the advanced concepts of Unity.

Authors: Raul Portales
Categories: Computers
Gaming has historically been a strong driver of technology, whether we're talking about hardware or software performance, the variety of input methods, or graph

Authors: Ashley Godbold
Categories: Computers
Master everything you need to build a 2D game using Unity 5 by developing a complete RPG game framework! About This Book Explore the new features of Unity 5 and

Authors: Simon Jackson
Categories: Computers
If you have C# knowledge but now want to become truly confident in creating fully functional 2D RPG games with Unity, then this book will show you everything yo

Authors: Sufyan bin Uzayr
Categories: Computers
ANDROID STUDIO If you want to become an Android developer, this is the ultimate book for you! Android truly dominates the mobile OS industry because of the long