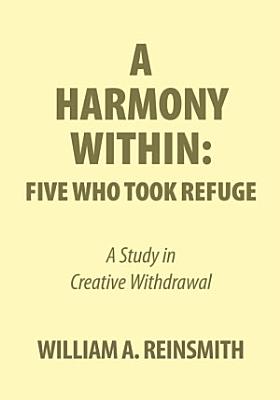 We live in increasingly troubled times, with social and political instability everywhere on the globe. It is a time of breakdown, of massive transition whose end is far from sight. Incessant change, fragmentation, loss of moorings, sporadic violence, even in the Western societies, threaten many who seek to live meaningful lives, especially in terms of inward growth. To the media-driven observer the world is in turmoil and globalization by no means a friendly word. Similar conditions have prevailed at certain times in the past. Reinsmith’s port of entry is just at those periods of crisis, those transition periods when social cohesion has all but disintegrated. A Harmony Within explores five such points in the history of Western civilization: the breakdown of the ancient Greek city-state; the last days of the Roman Empire; the religious wars in France during the sixteenth century; the transition to the Industrial Age in nineteenth century America; the cataclysm of World War I in Europe. Within each historical frame the author charts the life and times of one individual who even in the midst of discord finds a way of living fruitfully, of making a profound connection which transcends the uncertainties of his particular age. In ancient Greece the philosopher Epicurus withdrew from Athens to teach inner tranquility (ataraxia) to his friends. At the end of the Roman era St. Benedict founded a safe haven at Monte Casino where he created the Rule which offered spiritual security to his monks. With strife all around him Michel Montaigne quit public life and retreated to his Tower to mingle with the great minds of the past. Viewing the desperation drudgery of his fellow citizens, Henry David Thoreau repaired to Walden Pond – there to live alone with Nature for almost two years. In a Europe slowly moving toward war Albert Einstein found refuge in the Cosmos where he could contemplate the laws of the physical universe. The names of these five individuals are known to the educated general reader. Each of them lived in a different era, discovered a different track. Yet they had one thing in common: They chose neither to grapple with their own society nor directly aid in the coming of the next. They did something more radical: They withdrew - they chose to walk away, to take refuge and follow a path where inner harmony could be attained. They took arms against the troubles of their age not by encounter, but by creative withdrawal. Epicurus - The Refuge of Philosophy St. Benedict - The Refuge of Religion Montaigne - The Refuge of Letters Thoreau - The Refuge of Nature Einstein - The Refuge of Pure Science For each of these figures their refuge proved life enhancing. Yet a great paradox ensued. Though they withdrew from the society of their times what they accomplished reached far beyond them into the future: Epicurean communities spread throughout the ancient Mediterranean world and lasted for five hundred years; Benedictine monasticism provided Western Europe with spiritual direction down to the Middle Ages; Montaigne’s Essays have found their place among the annals of great literature; Thoreau’s stay at Walden Pond - immortalized in his journal, Walden - became the exemplar for living with Nature and a guide for achieving radical simplicity; Einstein’s four papers written during his years in a Swiss Patent office would be the foundation for the theories of special and general relativity, as well as quantum physics, all of which would change our view of the universe. Each chapter opens with a brief sketch of the age in which a protagonist lives and against which he reacts. To this extent, A Harmony Within presents a rough outline of Western civilization in crisis. But the heart of the book lies in portraying how these five great spirits nursed a calling which brought inner harmony to their lives, a harmony which seems to elude most humans at any period, reg

A Harmony Within: Five Who Took Refuge

Authors: William A. Reinsmith
Categories: History
We live in increasingly troubled times, with social and political instability everywhere on the globe. It is a time of breakdown, of massive transition whose en

Authors: Ichiro Horide
Categories: Business & Economics
This book demonstrates that during Japan’s early modern Edo period (1603–1868) an ethical code existed among the merchant class comparable to that of the we

A Dictionnary of the English Language

A Dictionary of the English Language

Authors: Erazim Kohak
Categories: Philosophy
The Green Halo is a highly readable introduction to the vast field of contemporary ecological thought. It is a basic education in environmental philosophy and a

The recollections of a country doctor. New cheap uniform ed