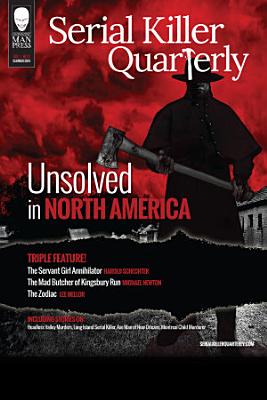 Another triple feature! “Unsolved in North America” - the third issue of Serial Killer Quarterly - focuses on 6 American and 2 Canadian cases of multiple murderer in which the slayer has eluded justice. Three years before Jack the Ripper stalked the streets of Whitechapel, a bold and barefoot killer was slipping into Austin's outbuildings to murder and rape black servant girls, sometimes after death. In his Servant Girl Annihilator, acclaimed true crime writer Harold Schechter drags this gruesome piece of Texan history back into the light for modern eyes to behold. 2500 miles north as the crow flies, and 20 years later, a series of bizarre decapitation/arson murders commenced in the gold-gutted Yukon. Canadian serial murder specialist Lee Mellor takes a look at these slayings, along with providing nail-biting articles on America's most infamous unsolved serial murder case, the Zodiac Killer of San Franscisco, as well as the Montreal Child Murders: a spate of tragic pedophile killings which plagued the city throughout the Eighties. Another Franco-American cultural centre was shaken to the core between 1918-1919, when the shadowy Axeman of New Orleans slashed and bludgeoned unsuspecting Italian couples in their beds. Grinning Man Press co-founder Aaron Elliott tells of this jazz-happy native of Tartarus, and his possible (but improbable) connection to organized crime. The mob also appear as unlikely suspects in prolific author Michael Newton's The Mad Butcher of Kingsbury Run. Set against the backdrop of prohibition-era Cleveland, a seemingly-bisexual butcher left at least 10 victims dismembered and disfigured in and around the city while legendary detective Eliot Ness faltered in his attempts to capture the perpetrator. In more recent events, Robert Hoshowsky and Kim Cresswell reveal the details of intriguing serial murder mysteries on America's two coasts: California's menacing Golden State Killer (aka the Original Night Stalker) and New York's Long Island Serial Killer. Considering how many of these offenders may still be at large and lurking in a community near you, Grinning Man Press warns that “Unsolved in North America” may destabilize your sense of personal security, result in intense fear and paranoia, and lead you to invest great quantities of money in alarm systems, intricate locks, and firearms.