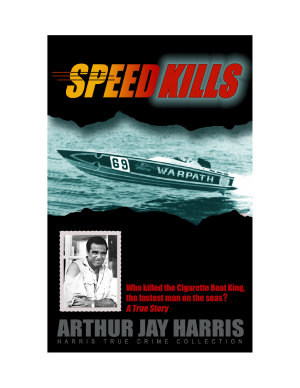 Now on Netflix: Speed Kills, the fictional movie adaptation starring John Travolta, screen-credited as based on the book Speed Kills. Everybody liked and loved Don Aronow. He was powerboating's favorite, best-known, and most flamboyant racer and boat builder, the brilliant creator and designer of the famous Cigarette go-fast boats that broke speed records on the water. In everything he did, he consistently pushed the limits, always at full throttle, testing himself. In ocean races, in the worst of conditions, he was at his best. A competitor described him: "We'd be taking a terrible pounding and I'd be almost beaten down to my knees when Don would come alongside and grin from ear to ear, then take off. God, he was so demoralizing." That was what won him two world championships. It also carried over to his reputation of being not only a ladies' man, but whose girlfriends were often married. Don was the living sales pitch for his boats - he sold magic. For the price, you could be more than you could ever imagine yourself as. You could be Don Aronow. Who bought from him? Well-off businessmen in middle age crisis - and the CIA and the Israeli Mossad - kings, presidents-for-life - and George Bush. If you're thinking James Bond, so was he - he named one of his winning boats 007. He was also Miami incarnate - everything great and dark and impenetrable and fascinating about the place. He was Bond - except he played on both sides of the law. You probably never would have known about Cigarettes had dope smugglers not preferred them. Nobody could catch them in them. Then came the Reagan-era Drug War, and Bush got Don a high-publicity federal contract to build patrol boats that were faster than those he'd sold to the smugglers. They were named Blue Thunder. The Miami Herald wrote: The man who designed the roaring Cigarette speedboats, favorite vehicle of oceangoing drug smugglers, has built a better boat, one that will snuff the Cigarettes. Watch out dopers. A crack of Blue Thunder, faster than a shiver, stable as a platform, is about to become the state of the salt-watery art on the side of the law. What did the smugglers think? Because then Don quietly and bizarrely sold his company with the contract to the biggest pot smuggler on the East Coast, Ben Kramer. It was a quintessential Miami moment - maybe the Miami moment of all time. Why did he do that? At the time, the public didn't know what he did. Years later, NBC News broke the story. Said Tom Brokaw: By the time drug agents on the trail put it all together, the Kramers and the government were already partners. That's right, the boats the Customs Service uses to catch drug smugglers were built for Customs by convicted drug dealers who used laundered drug money to buy the boat company. And you thought you'd heard everything. Actually, the feds had found out and made Aronow undo the sale. But a year later a grand jury was poised to indict Kramer, and subpoenaed Don to testify. The day before he would have, he was murdered in broad daylight. Nobody saw the shots - but they heard them, and then the high-pitched whine of his shiny white Mercedes sports coupe, the gas pedal floored by his dead foot - full throttle. And they saw the shooter's black Lincoln Town Car get away. Somebody was afraid of what he was going to say. The cops concluded it was Kramer - and everyone who thought that was right. But actually, Kramer seemed the least affected by what Don probably would have testified to - and his absence didn't stop two grand juries from indicting Kramer, and two trial juries from convicting him. Were the waters deeper than that?

Box Set: Speed Kills and The Unsolved Murder of Adam Walsh Books One and Two

Authors:
Categories:
New Scientist magazine was launched in 1956 "for all those men and women who are interested in scientific discovery, and in its industrial, commercial and socia

Authors: Elaine A. Moore
Categories: Social Science
This book covers both sides of the debate over amphetamine prescription and use. It discusses the history of amphetamine and related stimulants; ADHD and the us

Authors: Bernard Smalls
Categories: Business & Economics
Learn Digital Marketing Skills To Sell More Of Your Product of Service Now! We love social media for many reasons, but chief among them has to be the ability to

Authors: Andy Bennett
Categories: Music
Positioned between the psychedelic and counter-cultural music of the late 1960s and the punk and new wave styles of the late 1970s, early 1970s British popular

Social Issues in America: An Encyclopedia

Authors: James Ciment
Categories: Business & Economics
Truly comprehensive in scope - and arranged in A-Z format for quick access - this eight-volume set is a one-source reference for anyone researching the historic

The Fast and The Furious: Drivers, Speed Cameras and Control in a Risk Society

Authors: Helen Wells
Categories: Technology & Engineering
The Fast and The Furious: Drivers, Speed Cameras and Control in a Risk Society presents a sociological and criminological perspective critical to understanding