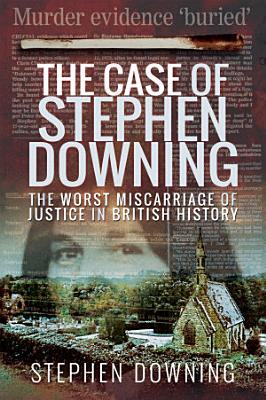 The memoir of a man wrongfully convicted of murder and his 27 years spent in the U.K. prison system until his conviction was overturned. On September 12, 1973, seventeen-year-old, naïve gardener Stephen Downing returned from his lunch break to discover the badly beaten, unconscious, thirty-two-year-old Wendy Sewell lying on the footpath of Bakewell Cemetery close to Catcliff Wood and the consecrated chapel where she had been attacked. Stephen ran to the nearby workmen’s building, and in the meantime Wendy’s attacker returned and dragged her body to a second location where she was subsequently found soon after. Despite having learning difficulties, Downing was immediately taken into custody, questioned at length without a solicitor, and eventually signed a false confession statement. Wendy died some two days later from her injuries. Following a very biased, three-day trial during February, 1974, Downing was found guilty by a jury, convicted, and sentenced to what was eventually a full life sentence. Just eight months later during October, 1974, there followed an appeal with fresh evidence from an eye witness who saw Wendy Sewell alive after Downing left the cemetery for lunch. However, the prosecution trashed this evidence, and the appeal failed. In the years following Downing’s incarceration, he was moved from prison to prison, continuing to maintain his innocence—and in doing so, jeopardizing any chance of parole, as he was “In Denial of Murder”—until eventually his plight reached journalist Don Hale. Hale’s tireless efforts led to an appeal in which Downing was released after some twenty-seven years, the longest miscarriage of justice in the United Kingdom’s legal history.

The Case of Stephen Downing

Authors: Stephen Downing
Categories: Biography & Autobiography
The memoir of a man wrongfully convicted of murder and his 27 years spent in the U.K. prison system until his conviction was overturned. On September 12, 1973,

Authors: Bhavini Algarra
Categories: Citizenship
It has been developed in partnership with the widely respected Institute for Citizenship after considerable research into teachers' needs and expectations. Suit

Authors: Don Hale
Categories: True Crime
Special Revised edition to commemorate the 40th anniversary of this unsolved murder: This is the true story of one man's quest to help investigate and overturn

Authors: Don Hale
Categories: True Crime
Don Hale's fight to clear Stephen Downing of murder, and the trail of clues the authorities want to hide. In 1973, a woman was brutally murdered in a graveyard

Unsolved Murders in and around Derbyshire

Authors: Scott C. Lomax
Categories: True Crime
There is no such thing as the perfect crime. Yet within these pages are thirteen twentieth-century murders whose perpetrators have - so far - escaped justice. S

Murder in the Graveyard

Authors: Peter Lord
Categories: Art, Modern
From 1971-86 Peter Lord worked primarily as a sculptor but has since worked mainly as an art historian. He is currently a research fellow at the University of W