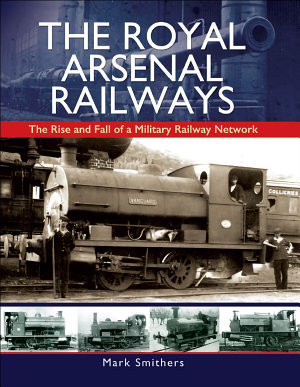 Mark Smithers has written a number of definitive books and magazine features on the history of locomotive construction and the development of narrow gauge railways. This book looks at the history and development of railways at the Royal Arsenal Woolwich, which evolved from humble roots in the 1820s into three separate railway systems, serving the Gun Factory, Laboratory and Carriage Department. The three systems originally had their own fleet of locomotives and rolling stock and were constructed using three different track gauges: standard gauge, 2ft and 18in. The Arsenal and its railways played a major role in both world wars and continued to hold an important place in gun and propellant manufacture until the late 1950s, when the complex was gradually run down. The Royal Arsenal and its railways were finally closed in 1967, when the last train of material left the site. This book covers the history of the system from its beginnings through to its demise and also details the significant remains of a once mighty network.

Authors: Mark Smithers
Categories: Transportation
Mark Smithers has written a number of definitive books and magazine features on the history of locomotive construction and the development of narrow gauge railw

The North Eastern Railway in the First World War

Authors: Rob Langham
Categories: Transportation
The North Eastern Railway underwent extreme change after the outbreak of war in August 1914. Within months, the company raised its own battalion of men and was

Reports of the Railway Department of the Board of Trade on Schemes for Extending Railway Communication, and on Amalgamations of Railways