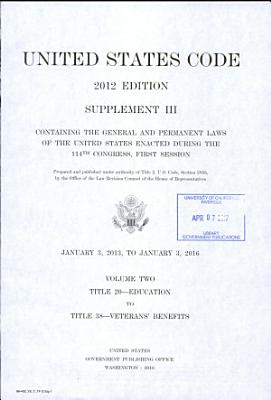 "The United States Code is the official codification of the general and permanent laws of the United States of America. The Code was first published in 1926, and a new edition of the code has been published every six years since 1934. The 2012 edition of the Code incorporates laws enacted through the One Hundred Twelfth Congress, Second Session, the last of which was signed by the President on January 15, 2013. It does not include laws of the One Hundred Thirteenth Congress, First Session, enacted between January 2, 2013, the date it convened, and January 15, 2013. By statutory authority this edition may be cited "U.S.C. 2012 ed." As adopted in 1926, the Code established prima facie the general and permanent laws of the United States. The underlying statutes reprinted in the Code remained in effect and controlled over the Code in case of any discrepancy. In 1947, Congress began enacting individual titles of the Code into positive law. When a title is enacted into positive law, the underlying statutes are repealed and the title then becomes legal evidence of the law. Currently, 26 of the 51 titles in the Code have been so enacted. These are identified in the table of titles near the beginning of each volume. The Law Revision Counsel of the House of Representatives continues to prepare legislation pursuant to 2 U.S.C. 285b to enact the remainder of the Code, on a title-by-title basis, into positive law. The 2012 edition of the Code was prepared and published under the supervision of Ralph V. Seep, Law Revision Counsel. Grateful acknowledgment is made of the contributions by all who helped in this work, particularly the staffs of the Office of the Law Revision Counsel and the Government Printing Office"--Preface.